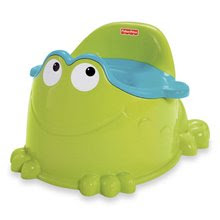 And so after a brief hiatus so that this mommy could wrap her head around the patience required for potty training, we have success! I can say with pride that my son is officially potty trained.

He does wear a diaper at night but hasn't woken up with it wet in over a week...heck, I think now it's been almost 2 weeks. The hardest part was getting him to recognize the sensation of having to go and running to the potty before wetting himself completely.

And yes, we even have #2 in the potty. But for some reason it takes him a while to relax and go with the flow when it comes to #2 but as long as he doesn't do it in his undies I'm okay with the amount of time and coaxing it takes.

But the best part? The best part is that he used the potty AT SCHOOL. He came home with a sticker for using the pot and all I could do was gush. He likes it when we gush and tell him how proud and happy we are...who wouldn't, right?

So now you are wondering how we got him trained, right? What was the secret that gave us success...I'm going to tell you...it was a timer. That's right, a timer. See the first time I started training him it was hard to be consistent. I would forget how much time had passed and then he'd fight me to not go. It was a mess, hence the small hiatus I took. And treats? He didn't care a thing about treats for sitting on the potty. When I was ready to go back to the training, I made sure he understood there were no more diapers, except for night time. And then I set the time for 15 minutes and we began. He caught on very quickly that the bell going off meant it was time to sit. And we did this for several days. Each day I added 5 minutes to the clock. Now we are at the point where he can go an hour or two before I ask him to use the potty. And he recognizes when he needs to go and tells me.

As for how we got #2 in the potty? We told him if he did it in the pot, he would get the one thing he is really into right now...jiggly animals. What are they? Some rubber animals from Wal Mart. He adores them and wants everyone they have at the store. He's a smart one...because anytime he does the dirty deed, he immediately reminds us that he is do a jiggly animal. Not sure what is going to happen when he has all the animals available at the store...

So there you have it, potty training tackled and accomplished!