Okay, so this isn't really about Handy Manny, the Disney character. At least I think it's Disney, I could be way wrong. Maybe he's a Nickelodeon character? All we watch is PBS at our house...and with that I've totally gotten off track. Geez...

A while back when we Hubby decided baby girl needed her own room I started looking to spruce up Spencer's room. I had really dropped the ball after he was born and never gave him room that finished touch. So it was time, because his sister could not have all the decorating fun. I looked online for inspiration and came across this cute shelf: 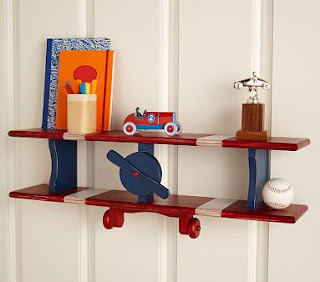 It's from Pottery Barn Kids and I fell in love with it. But I didn't like the price. So I showed it to my FIL and asked if he could recreate it. He told me he could try. Hubby had talked up how much FIL use to work with wood and pointed out things in his childhood home that were made by FIL. I was ecstatic and then promptly forgot about the shelf.

My in-laws came yesterday to help Hubby out with Spencer while I am in the hospital having baby girl. A few minutes after they arrived Hubbs called me outside and I was presented with this: 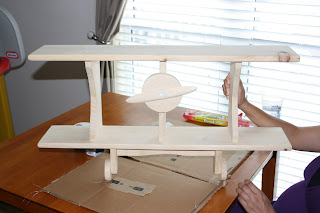 I was elated and quickly took it to Spencer's room to see if would be just like I imagined it on a certain wall in his room. It was and so Hubby and I set off to paint it so we could get it up. The end product looks like this: 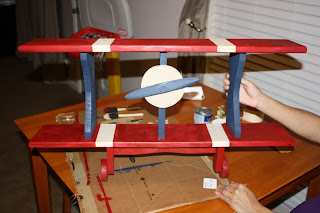 And putting the shelf up his room ended looking like this: 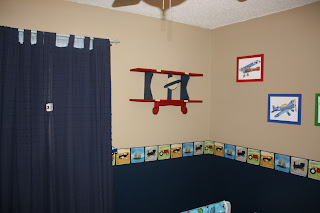 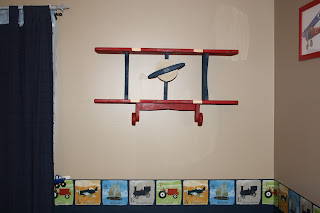 I love, love, love it! And I love that Spencer will tell you it's an airplane and that his Pop-pop made it. So thank you to Pop-pop for a job well done. I've already asked him to make something for baby girls room...might as well strike while the iron is hot.
Posted by Melisa S. at 7:54 AM