The idea for the toddler bed came from someone on Twitter. They linked over to a blog where a mom, who is quite handy made the bed just hours before giving birth. I am lucky to have a very handy husband and after showing him, her pictures wehe decided to give it a go.

This is the wonderful post that inspired us to be crafty. I probably could have tackled this bed on my own...but not with a one year old that refuses to leave my side. So instead I let Daddy tackle it and he did a fantastic job. And we are quite happy with the Cars fabric I picked out and the look of the bed. Here is Daddy hard at work: 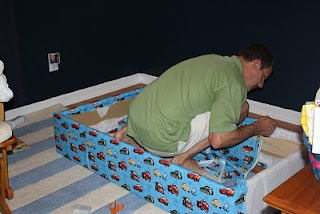 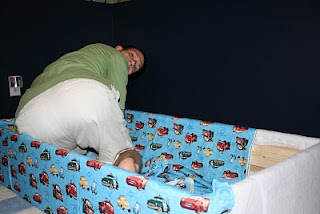 Today was the first morning that Spencer was able to see his bed and he went right to it and climbed in. He even put his head down and said "night night." I was quite impressed. For his afternoon nap I was able to put him down in the bed after I rocked him to sleep. Normally we don't rock but for some reason he was fighting a nap, even though I could tell he was exhausted. I keep telling him that waking up before the sun is a bad idea but he doesn't listen. Anyhoo, he slept in the bed for about an hour and even woke up in a decent mood. He didn't seem weirded out by the fact that he was in his room and in his bed.

So here we are and it is night one of us actually taking a bath and after putting on pj's going to his bed to lay down. Either he was really tired or he really loves his bed. He hopped right in and laid down. I nursed with him for a bit and then was able to move and he didn't flinch. This is not the same reaction we had with the crib. With his crib I could not even put him down on his most exhausted nights without him waking. I pray that he takes to the bed. I mean who wouldn't want to sleep in their own space and be able to sprawl out??

Here is, passed out: 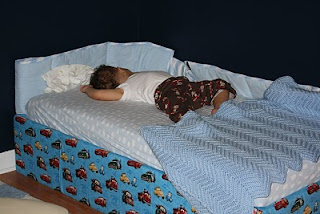 Wish us luck that this is night one of many future good nights!
Posted by Melisa S. at 8:10 PM