Back in March I mentioned Spencer would be having eye surgery. I had sort of forgotten about it because the date seemed so far away and they don't even give you a time until the actual week of the procedure. That time was yesterday at 7:45 a.m.

The day started very early for us as the hospital was located on the north side of Atlanta and we were required to be there by 6 a.m. Neither my husband or I had ever traveled to this part of Atlanta on a weekday and certainly not at the ungodly hour of 4:30 in the morning, so we didn't know what to expect.

We arrived early, thanks to no traffic and I think both of us were nervous but neither said a word. Imagine our surprise when we get to the hospital and the check in is painless and the waiting room is geared towards the children. The hospital is called Children's Healthcare of Atlanta, so we should not have been surprised but we were impressed. They had toys and a TV and everyone was bright-eyed and bushy tailed...at 6 a.m.! All the staff was pleasant, helpful and just plain nice.

They finally called us back to the pre-op room and we were checked on by several nurses. An anesthesiologist came in and told us what would happen and let us ask questions. No one was in a rush and everyone was very professional. It was nice to be in a place where they really seemed to care about the welfare of the child.

Spencer was given a small gown to put on and when they handed it to me, it was warm. I could not help but think it was a nice touch. I dressed him and we waited for the doctor to come in and talk about the procedure and mark the side of the body the procedure would be performed on.

I can't sat enough about Dr. Lipsky. He is professional and has an awesome bedside manner. I've always said that you have to be a special person to work with kids and with him it shows. He is patient and reassuring, especially to me, as I know my face showed my nervousness.

He came back with tears in his eyes and we were ushered to the post-op room to wait things out. Everyone kept saying the procedure was short and I remember looking at the clock hoping it was as short as they all said.

As we sat there waiting Hubby told me what a champ Spencer was in the room. He didn't fight being laid on the hospital bed and didn't even flinch when they came at him with the anesthesia mask. That's my boy, a trooper, through and through.

Suddenly not even 5 minutes had passe when the doctor reappeared. I think my heart jumped into my throat at that point. It was too fast, something was wrong, I was certain! Nope, Dr. Lipsky smiled and said it was over and had gone routinely. He explained what he had done and what we should expect the next few days. Before he finished speaking they were wheeling Spencer into the room.

Seeing my baby in a big hospital bed brought tears to my eyes. There he was in his little gown with a blanket on his legs asleep. I had to take several breaths while the staff finished checking him out before leaving us. My heart aches for parents that have to deal with their babies in the hospital for severe illnesses.

The nurse explained that he should wake shortly and how he might be feeling and what we needed to watch for as the day went on. Hubby and I watched as he lay there and I thought that he looked like he was having a much needed nap. After a few minutes he didn't wake and so the nurse came and woke him.

He woke and I immediately nursed him and he latched on like rock star and then looked at his Daddy and I and laughed. He looked like he was refreshed and ready to enjoy the day. There were no ill effects from the anesthesia and we were released from the hospital.

Our day was a bit out of whack, as there was a 3 hour nap in the middle of it but Spencer was never ill or extremely cranky. If you didn't know it, you would have never guessed he had even had surgery! I am glad it is over though and hope that it is the only surgery he will ever need.

Here he is with a toy that he picked out from the hospital: 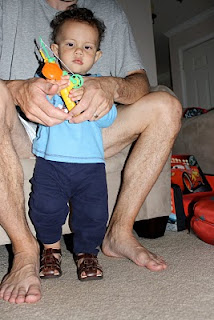