I'm a blogging slacker. I thought it was hard before to want to get on the computer, it's almost impossible now! And yes, I did have several people tell me that BEFORE he arrived. And yes, I didn't really believe them. So along w/ not being able to keep this blog updated regularly, means everyone I follow has fallen along the wayside. I do read here and there, but don't have time to comment, so please do forgive me! And if it makes you feel better, you can take me off your blog-rolls or follow list. I promise I won't be hurt!

Okay, now that, that is out of the way I can do a proper update. Spencer is getting along well outside the womb! I can't tell if he really enjoys it, but as there is no going back I guess he'll get use to it! We are still adjusting as new parents and I have to admit, it's hard. I will think about things like running to the store and then remember that it's no longer hop in the car and go. I sort of miss that part of my life, even if it's only been two weeks!

Daddy is a bit miffed at the fact that he can't calm Spencer down when he wakes up crying and fussy. I told Daddy it would take a few weeks for Spencer to realize it is Daddy, but it still hurts Daddy's feelings. I told him I'd gladly lend him my boobs for a week, but sadly it does not work that way. Spencer enjoys falling asleep on mommy's chest and will wake up if I put him down from that position. This makes night times quite a lot of fun for us. I went from not being able to sleep on my back to almost always sleeping on my back now. Um, yay? And forget about getting him to sleep in his bassinet on his back...that's a joke! I hope as he get s a little older he will eventually sleep in there. Our fingers and toes are crossed! And because I can't seem to put him down I've ordered a baby wrap to keep him close to me but give me some freedom. As much as lying around in bed is fun, having the use of my hands and moving around the house is better. I ordered one of these. I hope it works!

Breast feeding has been going well, though at times it hurts and I think it's because he gets lazy w/ his latching. I believe he just went through a growth spurt and that day was the worse...he was feeding every hour and I thought my nipples were on fire! They don't tell you about that when you go to the breastfeeding class!

And because not every face Spencer makes is cute, here are some pics of him in all his crying, face-making glory: (ok, so the first one is actually a fave of mine...he's throwing a gang sign!) 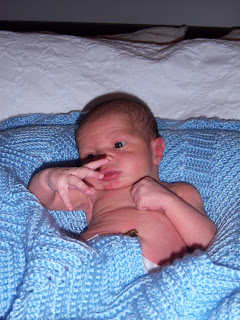 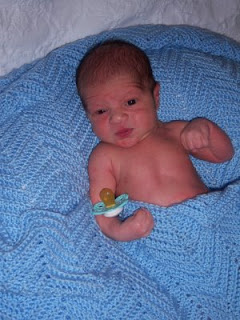 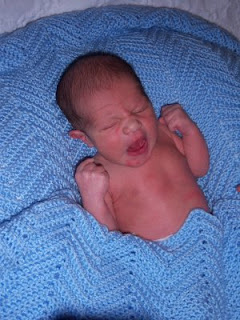 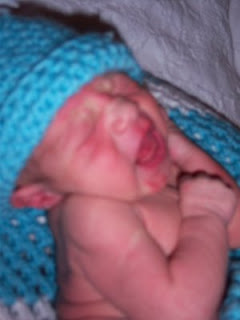