My SIL(to-be) Tati, asked me about the birth story and it was actually the first time anyone asked about how it went and how I felt. I figured for good measure I should also put it in the blog, if only to look back at and reminisce.

Thursday February 5 started out like any other day, the only thing I really remember different about it was that I had a lot of moments where my belly was rock hard and I had a bit more back pain than usual. I had spent most of the week re-reading my books on labor and had finally finished up that Thursday evening. I watched Grey's and Private Practice and the whole big, crossover event. Hubby half watched, spending most of the time chatting on the computer.

At 11 we moved from the living room to the bedroom and began to get ready for bed. I remember being very tired suddenly and just wanting to get into bed and have a good nights sleep. By 11:30 I was in bed and lay down. Suddenly I got the worse cramping pain and had to get up. It was like a nightmare PMS cramp, but I didn't think anything of it. Mostly because for the last few weeks I had been getting similar pains in my sleep. I figured this one was coming early. I repositioned myself, the blankets and my pillows and tried again. By this time Hubby was also in bed and he asked if he could help, as I was moving around and cursing the pain. I said no and remember saying that all I wanted to do was get some sleep. But the pain was strong and I knew sleep was not going to be an option. Suddenly I had the urge to go to the bathroom and I remember my mom telling me that, that was part of labor.

As the pains got worse Hubby got out of bed and began packing his bag and getting things ready. We didn't know if this was it, but he needed to be ready. My bag had been packed for a few weeks and it was moved to the car, along with the car seat. I was walking around the house, willing the pain to stop. Around this time Hubby suggested we time the pain. I still wasn't calling them contractions, I guess I was in denial. I think I wanted my water to break and all that before I recognized being in labor. Anyway, we began to time the pain and they were about 3 minutes apart. They were the shortest 3 minutes. Hubby called the doctor's office and the midwife on call at the hospital called back! Lo and behold it was my favorite midwife, Brandy. When Hubby said her name, I smiled and he let her know it was the first time I had smiled since the pain had started. Brandy suggested we come in, so they could take a look and determine if I was truly in labor or not. I changed into sweats and off to the hospital we went.

The hospital is about 13 miles from our house and at 1 in the morning, there was no traffic. At this point I was arching in my seat with every contraction. I felt like such a wimp. How was I going to do anything naturally if these contractions were already kicking my ass? Would they get easier? Would I suddenly get tougher?

At the hospital the registration desk was super slow. Of course, my pain was nothing new and they surely let me know I was not special. I didn't even get wheelchair assistance. Of course sitting was the last thing I wanted to do, but still. Finally at 2 a.m. they checked me in and took be back to triage. Hubby held my hand and was perfect throughout this ordeal. Every time he asked if he could do something, I asked him to please take my pain. He couldn't do that, but he let me squeeze the heck out of his hand and he breathed with me through the pain.

I had a birth plan and that all went out of the window once we got to the hospital. All I wanted was something for pain, which for whatever reason they could not give me right away. A nurse checked me and I was about 3.5 cm dilated. We thought they would send us home, as anything under 4 usually gets you booted out. But Brandy decided I should say, mainly because the contractions were so close. For this I was thankful.

I was wheeled into the delivery and labor room and remember thinking, "this is where I'm going to have my first baby." The room is nice and dim and calming. What isn't calming are the machines that beep and boop. Hubby was able to watch the contraction machine and we were able to watch Spencer's heart rate. I was hooked to an IV to get fluids, which needed to be done before any pain meds could be given to me. Talk about bummer. I went through 8 hours before I was finally given an epidural. During this 8 hours we realized that Spencer was not going to allow me to lay on any side but my right side. If I sat up, his heart rate dropped. If I rolled to my left side, my heart rate dropped. I was stuck on my right side, which baffled the staff and Hubby and I too.

When I finally got the epi, it was like heaven! The contractions at that point were the strongest they had been and I didn't feel a thing. I was able to rest and went in and out of sleep. Hubby was also able to rest as well, as we had both been up for over 24 hours at this point.

I don't remember at what point this happened, but my water was broken manually, hoping to get cervix to get moving. I remember feeling the rush of water, so I have to assume it was before my epidural.

During some point we were also told that after every contraction, Spencer's heart rate would drop and they were a bit worried about that turn of events. They couldn't tell us why it was happening, but because of that I was definitely not going to be able to move around...hence being stuck on my right side.

About an hour or two before Spencer was born I began getting an awful pain on the left side of my lower back. I thought it was a muscle spasm from being stuck in one position so long. We got the nurse and asked if I could please trying moving. She obliged and we tried the left again. Not going to happen. Tried my back and his heart rate was fine but it didn't help the pain. I went back to my right side and at this point I began feeling contractions, but only on the left side. We got the nurse again and they gave me a manual epi, that I could hit every 20 minutes for pain. It didn't help. Because I was lying on my right side, all the meds were situating on that side, leaving my left side vulnerable to the pain. Yay.

The midwife came to check me again and I was still only 5 cm dilated...this after the breaking of my water several hours before. So now I had spent too many hours being only 5 cm. Oh and when they broke my water, there was merconium in the water, which is not a good thing. Silly Spencer somehow had poo-pooed in the sac. Couple that with his heart rate and the midwife suggested we either get me on pitocin or we go with a c-section.

I have to admit, before I got pregnant I was all about getting a scheduled c-section. Getting pregnant and reading about things, I decided I would try to have a natural, vaginal birth. And so now here I was being told my two options, drugs and the hope that my cervix would open up or go with a c-section. I'm no doctor or midwife, so we asked for her honest opinion and she gave it. We went with the c-section. I didn't want to harm my little boy and after about 12 hours of labor, I was ready to get the show on the road.

I was given a hair cap and wheeled to the operating room, after signing paperwork. I have to admit that I was not the least bit scared or nervous. I think I was too tired to be one or the other. I wanted to be sure Hubby would be there and they assured me he would. They wheeled me into the bright operating room and I was moved from one bed to a table. The anesthesiologist was named Allan and he was cheery and nice. He walked me through another epidural and made sure stayed awake. He also took our camera and took the first pictures of Spencer. He arrived at 3:41 p.m. on Friday February 6th.

I didn't get to hold Spencer when he arrived, but Hubby did and he was proud. I remember them telling us he was 8 pounds 4 ounces and I was astonished at how much he weighed. I had been nervous that he would be a small baby, for no particular reason. When I heard him crying, I shed a few tears. Our journey was over.

Spencer came out and was diagnosed with transient tachypnea of the newborn or wet lung disease. This is when the liquid in the lung is removed slowly or incompletely. It results in a higher than normal respiratory rate. Spencer had to be taken to the NICU. After I spent 45 minutes in recovery, they took me to see him. I think I was too drugged to realize what was going on or to wrap my head around him being in the NICU.

The grandparents from North Carolina arrived and were able to see and hold our little boy. My family arrived from FL the next day and my mother actually got to see me hold my boy for the first time. I was crying like a fool, mainly because I hated seeing him with all these wires attached to him. Like a good mom, I tried breast feeding. He had already been given formula to my dismay! He took my breast and I have to hope he got enough colostrum, as my milk did not officially come in until the day we checked out.

It's now been 3 weeks and Spencer eats like a champ on the breast...sometimes too good. He still has moments where he seems to be breathing to fast or hard, but I don't worry too much about it. He was given a clean bill of health and I'm running with that! 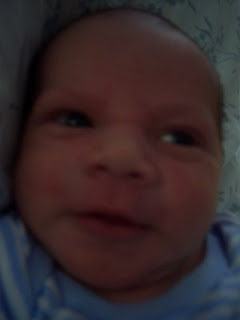 When I think about how everything went, I'm not upset. I wasn't set on a birth plan and my baby is healthy, happy (fussy) and adorable. He arrived the way he needed to and I'm for that I am grateful.
Posted by Melisa S. at 12:36 PM