The baby's furniture is in...it just has to be driven from NC to GA, so it will still be a little while before we have it and can set it up in his room. Which is good, cause the room still isn't ready, but Hubby is working like a fiend to get a portion of the basement ready, so I can move my office and we can start the nursery. Apparently we love the stress of it all and don't most people work better when they have deadlines breathing down their necks?

So the nursery theme and colors have been just about decided on, oh, who am I kidding, they've been decided on, even if I purposely only got small paint samples. Anywho, after going back and forth between wainscoting, chair rails and the like I decided on doing a border. I love bears and thought I could incorporate that into a little boy's room only to find that none of the borders I found really spoke to me, so then I went looking for our failsafe...airplanes. And we found several cute ones and among the bunch we found one that spoke to us. I did a daring thing and ordered it strictly by the photo online because the price was just really good. So here is the border that will go around the center or possibly a bit lower of the nursery:

We are pairing that with a khaki wall above the border and a navy wall below, add furniture and voila, the nursery is done. I am anxious to see the final product and will surely post before, during and after pictures.

Oh! I also found the cutest finials for the curtain in the nursery: 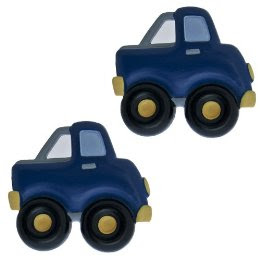 And thanks to some wonderful friends, I was able to purchase this pack and play for our bedroom: 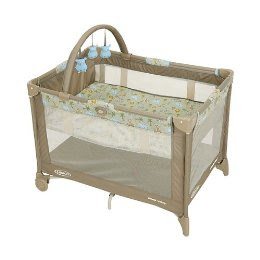 I know the first month is going to be hard and everyone has said I will want the baby as close to me as possible, so I figured this was a good buy. I opted against a bassinet only because they outgrow them so fast. I can use this pack&play as his bassinet while he is newborn and he can use it beyond. I think I had orginally registered for some fancy-schmancy one at BabiesRUs, but realized we didn't need bells and whistles. Sadly the dog's bed was moved to put this in our bedroom beside me. I was worried Prince would retaliate, but he didn't. We moved his dogbed and he went to where it was (still in our bedroom) and crawled in! We are lucky to have such an accommodating dog.