Last Friday we I decided we should take a day trip to see Spencer's godparents, i.e., my brother and his wife. After several weeks of cold, colder and snow I wanted to go somewhere warmer and they're in Florida so it was win-win for us.

I won't bore you with the details of traveling...suffice to say that the bigger car seat is a PITA. We will be re-thinking how we will travel with it in the future. What I did like was having Spence in his own seat and not having to share airplane space with a stranger!

We made it to Florida just before lunch and the weather was already warming up nicely. Florida had also been having some cooler than normal temperatures but it was nothing like we had been having, so we relished the sun and warmth. Spencer especially loves to be outdoors and so we were taken to a beautiful park by where the godparents live. The park is called Lettuce Lake Park and I was impressed with how big and clean it is kept. Spencer had a great time running around and enjoying the time outdoors.

We got back the same day and I have to admit that he did a wonderful job of staying happy even though his daily routine was ignored for the day. I have to wonder if he will be like me when it comes to change...I just roll with it.

I am thankful my husband has a job where we can do things like day trips and keep up with friends and family in other states. Not that traveling is always fun and glamorous but when it does work out, it's really nice.

One of my favorite pictures from the day: 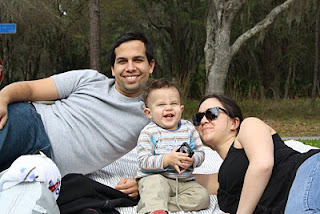