So today I had my final ob checkup for my c-section and all is well, but the best part? I am 10 pounds lighter than my pre-pregnancy weight. I haven't seen that weight in years! I was so ready to run out to the mall and have a party trying clothes tons and tons of new clothes. Then reality set in...unless it's nursing friendly and I can latch and unlatch it quickly, I can't buy it. But I'm still ecstatic about my new weight.

Spencer slept 6 hours straight the other night and it was a beautiful thing. The only thing that would have made it perfect would have been if he had slept in his bassinet instead of my chest. But sadly I was just getting over the stomach flu and he and I slept without moving for the 6 hours. It was so refreshing to sleep more than two or three hours. A 6 hour night was then followed by a 5 hour night in which he did sleep in his bassinet. I'm hoping for more of the same tonight, but deep down I know those two nights were probably a fluke.

And finally, God must be a woman because only another woman would know how much we could take when it comes to parenthood, specifically motherhood.

Of course no post is complete without a picture of our fast growing little boy: 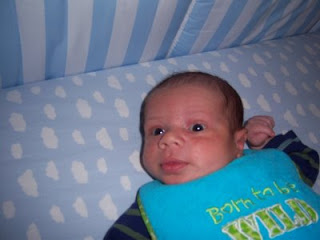