TV is my Boyfriend or TV Tuesday's

I haven't decided what I want to call these Tuesday post...as they are usually about whatever struck me from the week before. As I don't have any rhyme or reason on my blog, I'll go with both...for now. All subject to change, at any given time. Ha! 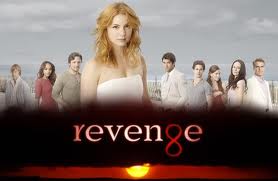 This week I want to talk about a new show that came out this fall. It's called Revenge and it's on ABC. This one intrigued me from the promos and stars Emily VanCamp. She was most recently part of the Brothers and Sister's show but have loved her since her Everwood days. Also on the show? Roswell hottie Nick Wechsler.

The premise is simple...she is out to get revenge on the people who screwed over her dad and her back when she was a child. The folks she's trying to get her revenge on? The creme de la creme of the Hamptons. Yep, those Hamptons. The very one that Puff Daddy throws his white party at...

Yes, the story can be a bit far-fetched especially since Emily's character Amanda/Emily has unlimited funds (thanks to her deceased father) and has basically spent all her time from the age of 18 to 25(?) preparing for this very summer. But it's good. It's edge of your seat good. It's can't for next week good. You think you know and then suddenly you don't. It's an hour that goes by very fast. I know I've seen people question how they could make this show get a second season because once Amanda/Emily gets her revenge...then what? I am sure the creators didn't plan this show to last one season and I most curious to see what happens when we get to the end of season one.

The only gripe I have? The infinity box that holds all of Amanda/Emily's revenge notes...how is she not afraid of someone sneaking up on her while she's reminiscing? It's almost happened once while she casually looked at an old video of her father's trial. To me it's a "duh" move...but it's TV so...

What about you? What are you watching this fall? Anything new? Any old faithfuls that you hope never get cancelled?
Posted by Melisa S. at 11:42 AM