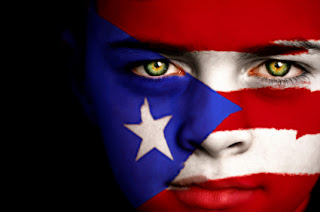 I consider myself Latina. If you must know I am Puerto Rican. And while I don't speak Spanish fluently, I understand it and can read it pretty well. Even if I don't always know what I am reading. And though my mother says differently, I was never forced to speak Spanish. Even though my grandparents didn't speak much English. I wish I had been forced to learn the language, because learning it in school? Not the same thing. I took it for several years and never learned anymore than I already knew.

People will ask if I am proud of my heritage. And I am. I don't hide what I am. Even though growing up I found it hard to fit in. If you look a certain way, or are different than what people are use to, they categorize in what they know. But it wasn't an issue until we moved to Florida. It was either 1982 or 83. Florida wasn't really a melting pot and the town we had moved to was unincorporated. I didn't have a hard time the first year but I looked different. I wasn't dark enough to be black or light enough to be white. My hair wasn't straight enough for me to be Mexican.

But the real issue started when I began 5th grade in a private school. Along with my tan skin and curly hair, I had a snaggletooth. Had I spoken Spanish fluently, it would have helped things. But since I didn't, I was once again this person that people could not put into a nice box. I remember a friend asking me one day "What are you?" I was confused and asked her to clarify. As far as I knew, I was human. But that's not what she meant, she meant my race. I told her I was Puerto Rican. (Which isn't a race, but a nationality.) She thought I was mulatto, a mix of both black and white.

High school was easier because the school was bigger and in 4 years Florida had begun to change. There were more people that looked like me and who were also Puerto Rican. I suddenly didn't have to fit in a box. But I didn't really know my culture. The other Hispanic kids all spoke Spanish fluently and so now I was sort of an outcast to my own kind. But I was happy to be friends with all races/nationalities and my biggest struggle during the high school years was just trying to figure out who I wanted to be, in typical teen fashion.

College was a whole other ballgame. Suddenly I felt pretty, beautiful even. I I could fit in just about anywhere, with anyone. I didn't have friends of just one race or nationality. I didn't date just one race or nationality, I was an equal opportunity employer. I was also in a large and diverse city. I could be whoever I wanted and from wherever I wanted. But I still hadn't come to terms with my culture or even my nationality.

What does it mean to be a Latina? When I look to my family to help me out, I realize we have assimilated quite nicely into the white culture. And that's okay. But as I get older, I want more. I want my children to know and be okay with telling people they are half Spanish. I want to know more about my culture and my nationality. I want to do more than vacation on the island of Puerto Rico. I want to be able to pass on traditions to my children. I want my children to be able to speak the language.

It has taken me a long time to accept that my hair will never be naturally straight. That my skin will always be tan. And that I may not look like what Hollywood says a Latina should look like. (Jennifer Lopez, Selma Hayek) But even with my curly hair, tan skin and fiery attitude? I am Latina.
Posted by Melisa S. at 10:42 AM