Are You Going to Eat That?

I remember when we took this picture and it quickly became one of my favorites: 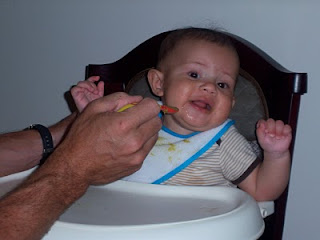 His expression of horror at the spoon of food approaching him cracks me up each time. Little did I know that it was a sign of things to come. See, Spencer can be considered a picky eater. That is when he eats at all. Before his first tooth came he began to show signs that pureed baby food would do for a while. Then we began to give him little taste of our own food and around that same time his first tooth made its appearance. After that, he refused pureed food. It didn't matter what we put on the spoon, he wasn't interested. At his 9 month wellness visit the pediatrician asked how feeding was going. I lamented on how he would not eat. The Doc laughed and said it was normal and to not force the issue. Apparently since he was walking, this was more important than eating. As long as I was still breastfeeding, Spencer was getting what he needed. Ok, that makes sense. So I didn't worry about it but continued to offer him what we were eating and got rid of the pureed food and moved on to stage 3 foods. I figured with more flavor and more texture these foods would fix all my problems.

We had a few moments where it seemed he really liked what I was offering. And then the teething continued and we were back at the beginning. Here we are at 11 months and he still won't eat. At least not the serving sizes "they" say he should be eating. I hear about kids his age loving cheese sticks and yogurt. Not my guy. Oatmeal and eggs only on a really good day. Chicken? Heck no. Beef? Uh-uh. Mostly we give and he shoves what we offer into his mouth and he chews/gums up the food and then promptly spits it back out. Talk about frustrating!

We've got him his own bowls and silverware and that works for maybe one or 4 spoons and then he does what I call the tabletop sweeper. This is where he uses his hand to sweep everything on the tabletop to the floor. And then he peeks over the side of his chair to make sure it has hit the ground and then looks up at you like "neat, huh?"

What will he eat? French fries. Lots and lots of french fries. And shredded cheese. And sweet potatoes. Everything else? You guessed it, it gets chewed/gummed up and spit out. I am at wits end, cause honestly he's been walking for 3 months, so that novelty should have warn off already!

And for the record, I don't mind continuing to nurse him. But I would like him to enjoy something other than breast-milk. I mean I love food and so does his Daddy. Surely something like enjoying good food doesn't skip a generation??
Posted by Melisa S. at 9:00 PM