So this week we took Spencer in for his 2 month wellness visit, which also included him getting his first set of shots. After weighing the pros and cons about vaccinations I decided that it was best for us to go ahead and get them and do them on the normal schedule. This does not mean that I was put at ease about them but what worried me the most was how Spencer was going to react. Or maybe I was more worried about ME?

Poor guy was happy and talking the whole time he's getting weighed and measured and examined and all I could think was how soon he would be screaming in shock and pain from the 3 pricks of a needle. Thankfully he has a big strong Daddy that was there to hold him...and when he screamed out (Spencer, not Daddy) I have to admit tears came to my eyes and it broke my heart. He turned bright as a tomato and let out a heart-wrenching wail and it took all my control to not wail along with him! But he survived and doesn't seem to have a fever or be acting out of sorts!

He's growing fast, weighing 13 lbs and 13 ounces and measuring 24 and 1/2 inches! Daddy is going to make a ballplayer out of him yet. 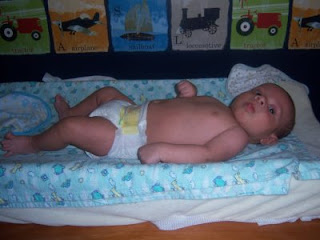